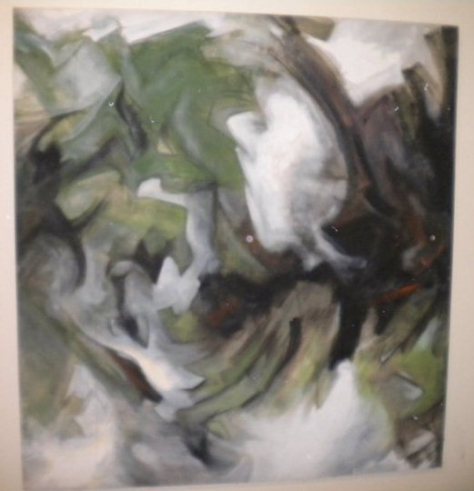 This is one of the inventory photos that will look much better in person or with a better photograph. This one is a bit blurry. Nevertheless, my first impression was that the white shapes represent doves, either diving in or being sucked into a whirlpool of drama, darkness or war. This looks to be a later work, maybe in the mid to late sixties, so with the Vietnam War very much in the mindset of college campuses, and given my aunt’s progressive and peace-loving nature, I would be surprised if she did not comment, artistically, on the war.

On my father’s side, I lost a cousin in the Vietnam War – my aunt would have been aware of that and the sorrow that our family felt. She came to Delaware several times and when she did my father would always through a big party for her – so that his side of the family could get to know her. My dad was a plumber by trade but an entertainer at heart. Daddy a gregarious sort and was always excited when she came to visit. The occasion always called for a party with her as the guest of honor. I am sure she took all the showmanship in stride, but it was during these times that she got to know his six brothers and two sisters, one of which was my aunt who lost her son 1968. Even without the personal connection and loss, my aunt and the entire religious community would have prayed for the safety of our troops and the end of military aggression.

It is only conjecture that this painting could be connected. But I see the olive green colors as representative of the U.S. Army and also of the jungle of Southeast Asia.

Is peace coming to the rescue or is it being swallowed up? More about this later.

Portrait of a mid-century contemporary artist, AKA Ann Walsh